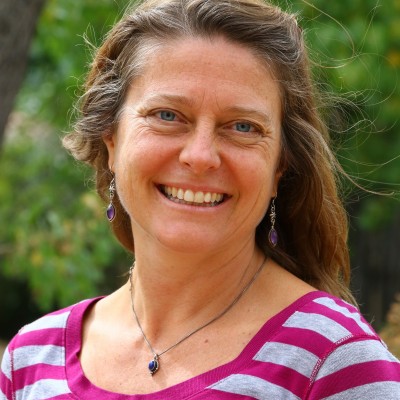 Erika is originally from southern Indiana and moved to Florida when she was thirteen.  Her love of nature and science began in the forested hills of Indiana with her grandmother, who was a Chemistry teacher.  She graduated from the University of Florida, with a Bachelor’s of Science degree in Wildlife Ecology and Conservation.  In addition, she earned her Masters of Education in Curriculum and Instruction with the focus in Middle Level Science, from the University of West Florida.

Erika taught Middle School Science and Drama on the island of Kauai for three years.  She also worked for several non-profit agencies on Kauai where she was trained in various expressive arts; including a theater program for girls and Playback Theater.  One of Erika’s passions since undergraduate school was yoga and meditation.  She became certified as a yoga teacher and began to share it with her students on the island.  Erika gained extensive experience with youth in and out of the classroom for six glorious years on Kauai.

Taos has been home for the last eight years.  Erika continued her work with youth at the Community Wellness Center.  She has been assisting her husband Andy Tafoya on their organic farms, Las Aguas, for the past several years and raising their son Jaxon.  Erika is so excited to work with youth again and be a part of the TISA team.  She is grateful to be at a school that supports art integration into every subject and looks forward to weaving art and mindfulness into her classes.